The best equipment for combating bedbugs

Bedbugs – a plague that was fought off long ago returns

They are on the rise at breakneck speed – bedbugs. From the luxury hotel and the youth hostel to the private household – the pests are more than an annoying plague, which can only be effectively fought by specially trained experts using the latest technology.

In addition to the unintended transportation of the bug in luggage from one place to another and the country’s domestic trade in second-hand goods, the following factors are reasons for the return of the harmful pests:

The use of DDT (dichlorodiphenyltrichloroethane) has successfully combated annoying pests for a long time. However due to the detectability of adverse effects on the ecological cycle and harmful consequences for humans, the insecticide was banned in most Western industrial nations in the 1970s. In 2004, in accordance with the Stockholm Convention, DDT was only allowed worldwide when it is used to fight insects that transmit serious diseases e.g. malaria or the like. However with the worldwide ban on the use of the insecticide, the distribution and multiplication of bedbugs has also increased again.

Do you want to find out more about bedbugs?
We will provide you with comprehensive information.

We answer the most important questions concerning bedbugs and Thermo-bug®. This is where you will learn everything that you need to know.

How do I recognize bedbugs?

Despite their small size, bedbugs are visible to the naked eye. We’ll tell you how to identify bedbugs, the stages that bedbugs go through in their lives, and the unmistakable signs of a plague of bedbugs.

For professionally combating bedbugs with denaturation. Pest control companies rely on the efficient, safe and simple solution: Heat death for bedbugs with Thermo-bug® 2.0 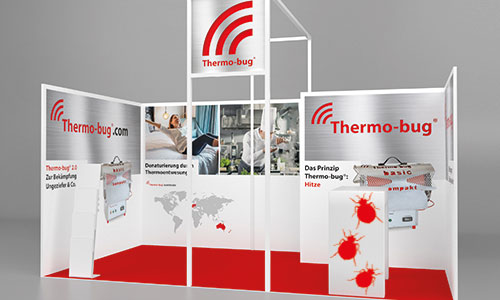